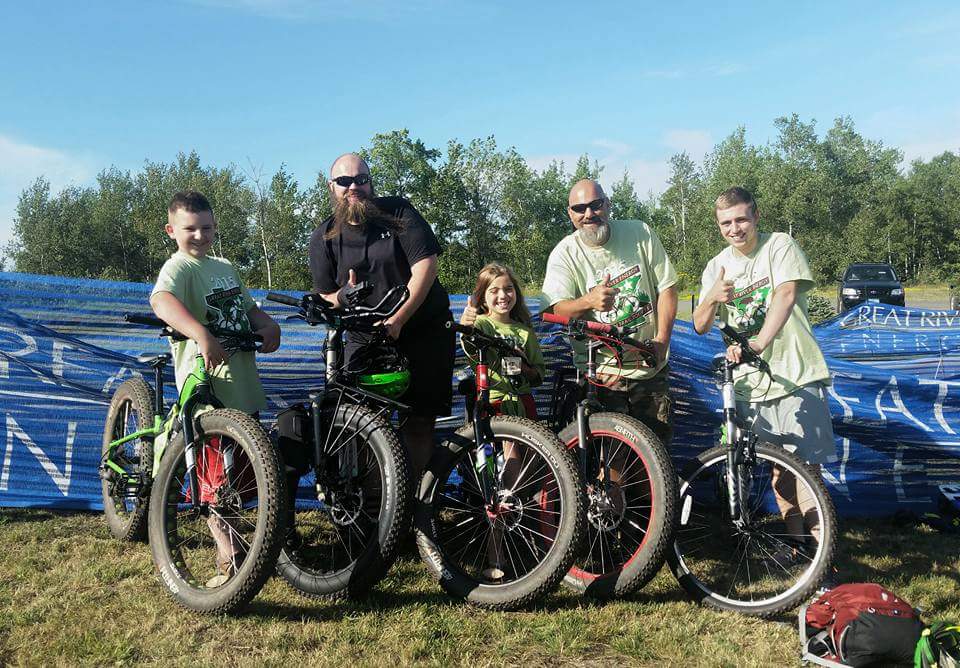 A slight departure from biking today.
Reference my post regarding the alleged misconduct of a Hibbing High School vice principal from March 2015 here. It’s not alleged anymore, and really never was!!

I don’t get to say this often, but I was RIGHT sadly!!

I again call for all top administrator’s of ISD #701 to step down in shame, as well as the principal!!
Sweeping changes are still needed! All school board member’s, the principal, former superintendent and police liason are fully and completely to blame, HANDS DOWN!!

Now, fast forward to yesterday….
the Minnesota Department of Human Rights or MDHR, has made a ruling…. 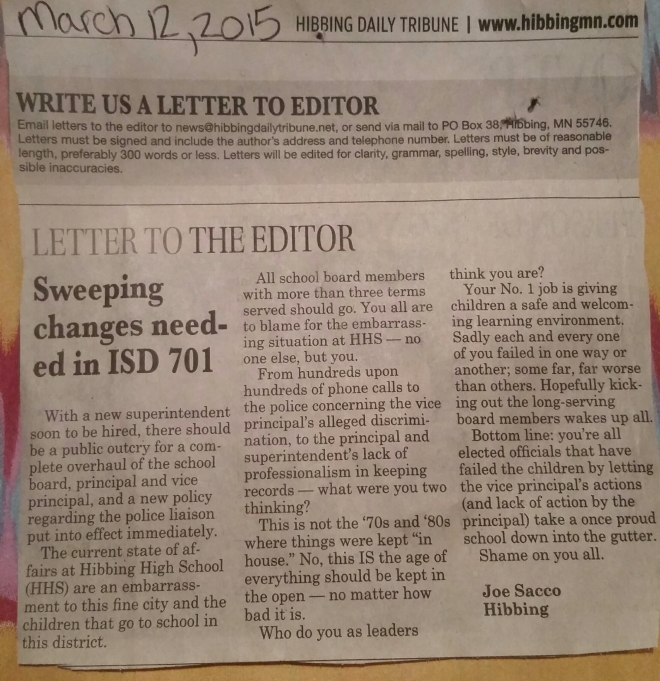 And a piece I wrote for the Duluth New Tribune shortly after the above was written…..

Further proof that a HUGE lapse by ISD 701 leaders was done and a large amount of CHILDREN were affected by a predator of children…….

And the local news reports are flooding in….. the DNT story.

Bring Me The News story

Another blog post I wrote, yes I’m angry!!!
Angry that the supposed leaders of ISD #701 are NOT taking this seriously enough!

Below is a summorized report by the MDHR……..
The summarized detailed of the discrimination case are in the text below, Please read this public document with care and sensitivity to the victims.

WARNING: Those who have been victims of discrimination, sexual abuse, and sexual assault may find this document VERY difficult to read. Our hearts and minds are with the victims of this discrimination. Please contact Advocates for Family Peace anytime for free and confidential assistance at 218-263-8344 if you need to talk with an advocate because you are a victim now, were in the past, or if this is too difficult to read.  Resources are also available with the Northern St. Louis County Sexual Assault Program and Program to Aid Victims of Sexual Assault.

MEMORANDUM REF: 61854 Page 2
No student will be excluded from participation in, denied the benefits of, or otherwise subjected to discrimination under any education program or activity operated by the school district on the basis of sex.
10. The respondent’s nondiscrimination policy further provides that “[a]ny adult school district personnel who receives a report of unlawful sex discrimination toward a student shall inform the building principal immediately.” The policy further mandates that the principal “must notify” the respondent’s human rights officer without screening or investigating the report and must reduce the complaint to written form if the complaint is verbal.
11. The respondent’s student handbook prohibits certain clothing from being worn in school. Examples identified in the student handbook include: bare midriff, navel-baring tops, spaghetti strap tops, see-through tops or wearing clothes such that cleavage or undergarments are revealed.
12. The respondent’s Policy Manual states that “[s]tudents violating this [dress code] policy will be directed to make modifications in their clothing or will be sent home for the day.”
13. The respondent’s student handbook also provides a bright line rule on public displays of affection. Under “STUDENT RELATIONSHIP,” the respondent provides a single-sentence rule that states: “Overt displays of affection are prohibited.”
14. The Department has jurisdiction over matters of any “unfair discriminatory practice” that interferes “in any manner in the full utilization of or benefit from any educational institution, or the services rendered thereby to any person because of . . . sex . . . [or] sexual orientation. . . .” See, Minn. Stat. §363A.13, Subd. 1.
15. The Minnesota Human Rights Act is to “be construed liberally for the accomplishment of the purposes thereof.” See, Minn. Stat. §363A.04.
16. The primary issues to be determined in this matter are whether the respondent discriminated against female students and students who are engaged in same gender relationships in the access and full utilization and benefit of the services offered by Respondent’s educational institution.
Sexual Abuse Inquiries
17. Respondent specifically confirmed to the Department that the senior administrator has no “expertise” in sexual abuse or sexual assault matters.
18. Respondent further admits that the senior administrator had no formal training as a school counselor or guidance counselor.
19. Respondent unequivocally confirmed to the Department that it would be problematic if the senior administrator operated above and beyond his expertise when working with students.
20. The senior administrator specifically denied ever having discussed such issues with any student.

MEMORANDUM REF: 61854 Page 10
discriminatory conduct occurring within the legal timeframe the Department can consider in order to support a finding of illegal discrimination.
100.The confirmed instances of differential enforcement of respondent’s public displays of affection policy against homosexual students occurred in the 2011-2012 school year.
101.While witnesses also notified the Department of other derogatory comments and actions pertaining to homosexual students, the Department was unable to corroborate those that were timely.
102.Therefore, although the Department found the evidence pertaining to this allegation to be very disconcerting, it is nonetheless unable to reach a finding of illegal discrimination on this basis.

The officals press release from the MNHR.

As a parent of childern moving through ISD #701 I’m taken a back by your lack of concern in dealing with the Fleming situation.
Even though you consider this situation resolved, the community does not.

I understand this happened before you took the Superintendent job.
I also understand your stance on “let’s move forward.”
Although that stance is great in theory, in real life….. the actions of Mr. Fleming, and the lack of action by the previous superintendent, the current principal, and the school board as a whole are abhorrent.

You now are bearing the brunt of the communities outrage over how Flemings actions could’ve gone on for so long unchecked, and NOT dealt with.
However unfair you personally feel it is; it is something you have to deal with.

With all that said, you had to know you were going to have to deal with this situation one way or the other when you decided to take this job.

I do not envy your position; it’s literally being in between a rock and a hard place.
How you deal with the community now regarding this, will and can say a lot about you as a person moving forward in this job.

During the public interview process I asked you how you’d deal with the Fleming situation; since you stated in your previous job you dealt with a similar situation.
So far I’m not convinced you were truthful in your answer.
You stated you were the man to make the hard decisions, no matter what they might be.

Well Mr. Johnson, now is the time to show you’re willing to make those hard decisions.

A huge 1st step would be to attend the coalition meeting tonight.
Show the community you can take the heat!!
Answer what questions you can, let the public vent on you.
That’s what people need now more than ever; after the horrid unimaginable things that happened under the roof of once such a proud school.

My bigger advice to you Sir…. clean house!
Remove all school board member’s!!
Remove the current principle!!
Remove Fleming permently!!
If you truly want this situation to go away, this is the way to make it stop.
All the above people are responsible for what you are dealing with now.
You owe them nothing more than being held accountable, but they want to accept no responsibility for the grief you’re dealing with.
Make them ALL accountable for their lack of action regarding Fleming.